Fifty selected programs from the Grosvenor Room’s performing arts collections, featuring theatre, music, and dance productions. These programs are a representative sample of the entertainment available to Buffalo audiences from 1816 to 1951, and include local talent as well as internationally renowned performers. The featured items are from the following two collections:

Programs, playbills, and cast lists from theatrical venues in Buffalo, NY and vicinity. The bulk of the collection is from 1890 to 1950 and includes drama, comedy, vaudeville, minstrel, and musical theater productions held at more than 70 theaters. Traveling productions featured famous performers of every era, such as Edwin Booth, Maude Adams, John Barrymore, Rosalind Russell, Orson Welles, and Katharine Hepburn. Local ensembles and theater companies also document a vibrant entertainment community in Buffalo, including homegrown talent Katharine Cornell, dubbed "The First Lady of the Theatre” during her illustrious career.

Programs, playbills, and cast lists of music and dance performances in Buffalo, NY and vicinity. The bulk of the collection is from 1860 to 1930 and includes performances of dance, opera, musical comedy, orchestras, chamber music, choirs, and instrumental ensembles. The majority of the programs are from music performances, and many venues hosted famous musicians and composers including Ignacy Jan Paderewski, Jenny Lind, Geraldine Farrar, Maurice Ravel, Walter Damrosch, Gustave Mahler, Lily Pons, and Serge Rachmaninoff. Buffalo also hosted opera companies, orchestras, and symphonies from New York City, Boston, Chicago, and Pittsburgh. Early Buffalo orchestras and singing societies, including the Buffalo Orpheus and Chromatic Club, are documented in this collection, as are the music halls, theatres, social clubs, museums, and other venues that hosted national and international performers.

Grosvenor Room of the B&ECPL 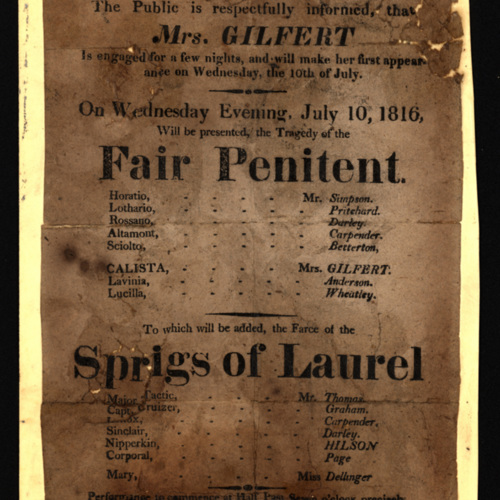 This is the earliest dated program in our collection. The location of the performance is unknown, but was likely an early Buffalo playhouse. Amelia Holman Gilfert (Mrs. Gilfert) was considered the first star of the American theater.

Buffalo philanthropist Maria Love and her sister Elizabeth ("Libbie") occasionally starred in amateur theatre productions. Mrs. R. R. Cornell is May Fielding, a Buffalo actress who went on to have a successful Broadway career. 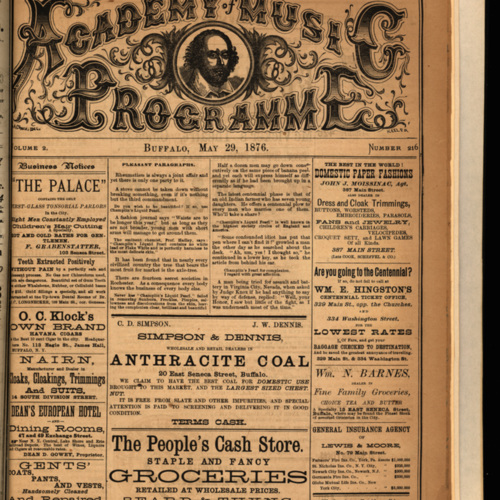 Edwin Booth was one of the biggest stars of 19th-century American stage.  During his career, he was known for his Shakespearian roles, especially his portrayal of Hamlet.  Born into a famous acting family, the Booth name today is more likely… 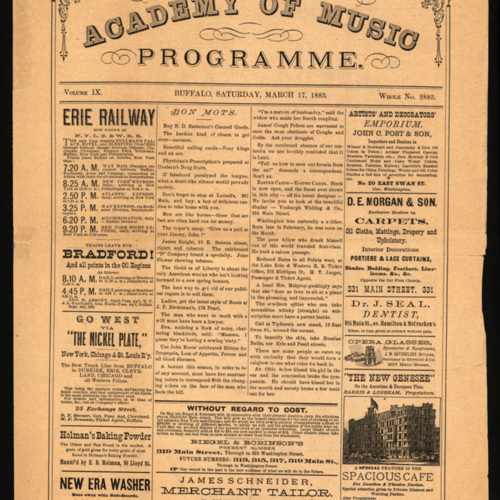 Helena Modjeska was an acclaimed Polish-born actress known for her Shakespearean roles. Leading man Maurice Barrymore was the patriarch of the Barrymore acting family, father of John, Lionel and Ethel, and great-grandfather of actress Drew. 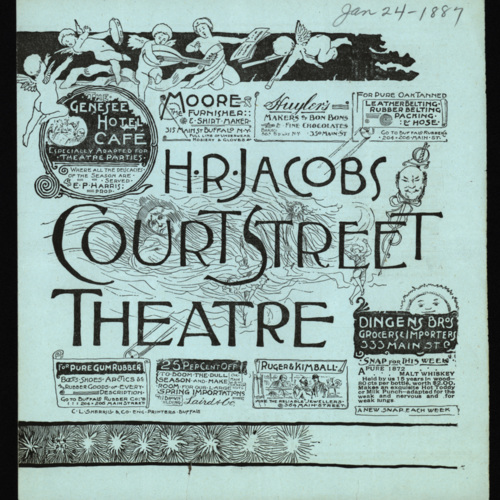 The child actress known as "Corinne" and her mother, Jennie Kimball, starred in this production. H.R. Jacobs of Albany managed theaters in Buffalo and several American cities.

The Lady of Lyons 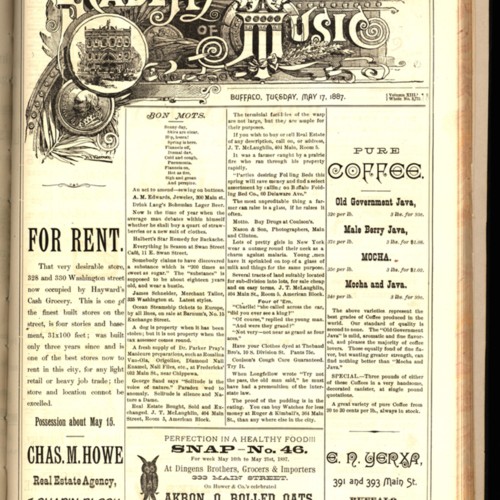 Lillie Langtry, nicknamed "The Jersey Lily," was a British-American socialite, actress and producer. The author of this play, Edward Bulwer-Lytton, was a British politician and writer. He coined the phrases "the great unwashed," "pursuit of the… 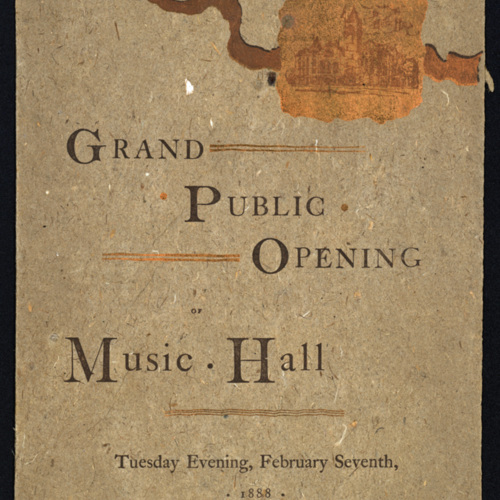 The Music Hall on Main Street opened on October 18, 1887, and was the and later was completely remodeled into the Teck Theater in 1900. 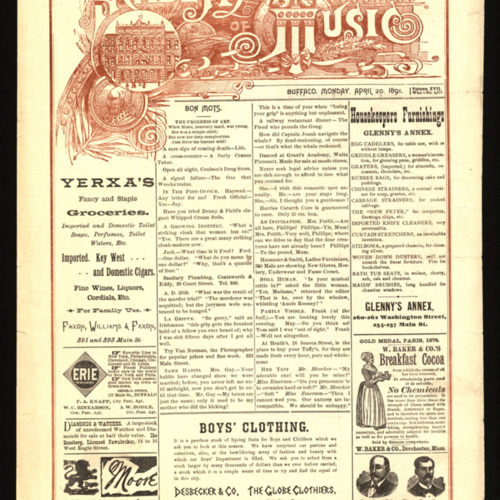 Sol Smith Russell was a leading actor known for his comic roles. His performance in A Poor Relation was one of many times he visited Buffalo. The Academy of Music, Buffalo's "Thespian Temple" from 1868 to 1895 was a successful venue that hosted… 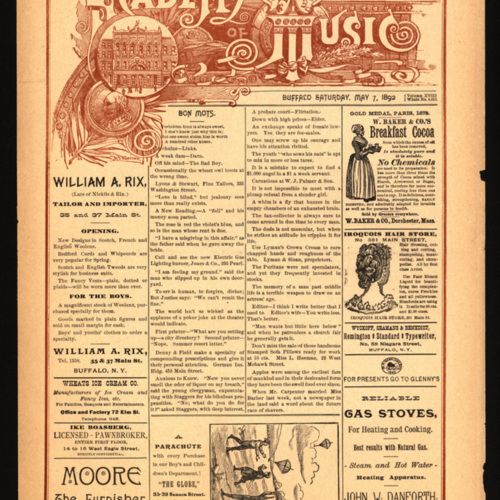 Stuart Robson was a popular comedic actor who played Buffalo stages many times. The Academy of Music, Buffalo's "Thespian Temple" from 1868 to 1895 was a successful venue that hosted some of the biggest stars of the late 19th century theatre.

The Symphony Orchestra of New York 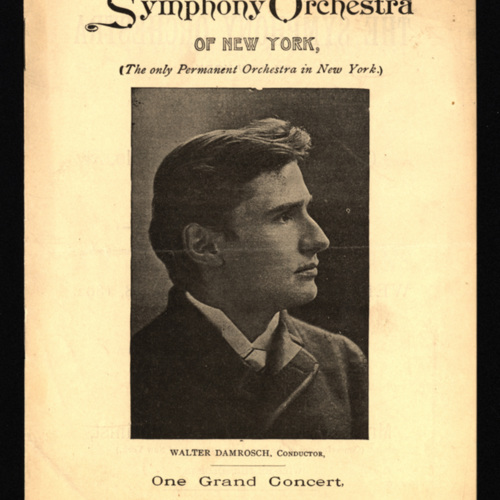 One of several visits to Buffalo by famed conductor Damrosch and the New York Symphony Orchestra.
View all 50 items